Electromagnetic forming (EMF) was invented by Harvey and Brower in 1961 [US 2976907]. This technology includes all production processes using the energy pulsed of magnetic fields in order to apply Lorentz’ forces and thus deform a workpiece made of an electrically highly conductive material.

Depending on the geometry and the setup the following major process variants can be distinguished.
These are

The principle of electromagnetic forming is based on the mutual induction concept. The typical setup consists of

In order to start the process, the charged capacitor of the pulsed power generator is discharged by closing of the high current switch. Consequently, a damped sinusoidal current flows through the tool coil inducing a magnetic field and a secondary current in the workpiece, which is directed opposed to the coil current. Due to the skin effect, both currents are concentrated near the surfaces facing each other. The secondary current shields the magnetic field, which is consequently concentrated in the small gap between tool coil and workpiece. According to [Kad59], the efficiency of this shielding depends on 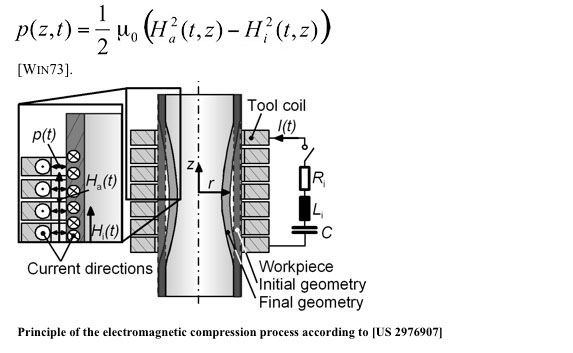 In many practical applications the setup for electromagnetic tube compression is supplemented by a so-called fieldshaper or fieldconcentrator, i.e. a usually axis symmetric part with one or several axial slots made of a material of high electrical conductivity, which is positioned between tool coil and workpiece. In these cases, the coil current induces a secondary current in the fieldshaper surface (skin effect), which in turn induces a current in the workpiece.

Advantages and disadvantages of a fielfshaper application

The application of a fieldshaper features several advantages as e.g.

The major disadvantages are

In principle, the use of a fieldshaper is not limited to compression [Neu88], but the application in electromagnetic expansion or sheet metal forming processes is rare.